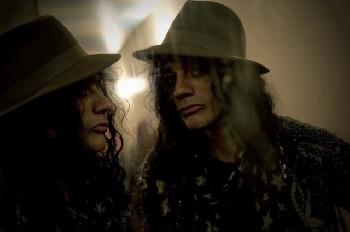 Last October 2011, we met three musicians rocking with its leader’s name at Alfarock Fest. After that brutal show we wanted more. Luckily, Adam Bomb is always on the road and he visited us again in 2012. During his last tour in Spain we had an appointment with Adam, but after some problems with the promoter in his last show at Calella, we had to cancel it and to do it by e-mail.

ZonaRuido: In Summer’12 your latest record, Rock On, Rock Hard, Rock Animal, was released. Are you glad about the way both, followers and press, had received it?

Only a part of it was released as a tour CD. It takes a very long time and a lot of money to mix 40 songs. I have to do some tape recovery because the studio got flooded and the tapes got fucked. We have to bake them and transfer about 3 or 4 more songs to files so I can mix the last of it, have it all mastered and then design a cover and press it. I hope to get it all done by the end of the year or the beginning of the next. With everything that was going on in my life at the time it was recorded, it was just something I wanted to make. The studio was devastated by the hurricane. It was the swan song of a multi million dollar analog recording studio.

ZR.: Talking about your followers, last year you did a very long European tour. How do you evaluate it?

Touring has been my job, and a big part of my life. I try not to evaluate it. I just try to live it. I will go wherever the movie takes me. Things always change, musicians come and go, the vibe and the songs change. It’s always different. I’m always looking out for the next tour, which is always the purpose of the current tour.

ZR.: In this tour you have travelled around 12 countries and visited dozens of cities. Sometimes, the big distances from show to show made you drive hundreds of kilometers with no days-off in between. How hard was that? Did you ever consider putting a show off? In Spain bands are not used to these kind of tours…

It’s hard but in order to make it work, sometimes you have to drive really far. It’s part of the job. 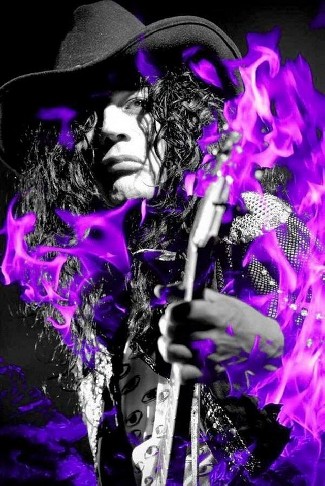 ZR.: Fireworks are one of your signatures on the stage. Have you ever had any problem with them? Maybe, having to runaway in flames…?

Once or twice in 10 years but I’m really careful. I know exactly what they do and where there go, it is a big part of my job to make sure nothing goes wrong.

ZR.: What is your favorite venue to play around the world? And your favorite followers? Are there any significant differences between the followers in one country and another?

I love to play outdoors and I have my favorite places in each country. There are too many, just look at my tour archive and you will see the places I go back to, frequently. I guess there’s a reason for that.

ZR.: Your band has been the same on your lasts tours. This is Violet the Cannibal and Paul Del Bello. Is this line-up consolidated? Are you planning the next shows with them?

No. Paul started his own solo band in Italy. Violet plays in a UK band. I’m using Bobby Reynolds on drums now. He played on some of the new album and a French bass player, Maxx Nroll.

ZR.: Could you tell us more about them? How are the rehearse going?

I've played with Bobby off and since 2003. Maxx did my last tour and we have known each other for 5 years and we have the same taste in music. Going on a tour like we do is like preparing to go to war. There's a lot more involved than just playing. Things are going just fine right now, but when one bad move, things could change in a minute. It's still a month away. We'll be ready, we're always ready.

ZR.: By the way, you have recently announced the ADAM BOMB vs THE WORLD tour 2013 with all the shows in Europe. What can we expect in these concerts? Your American fans could feel less attention, couldn't they?

I don’t play in America. I’m too wrapped up in other things whenever I’m here. Maybe someday... You can expect a stadium show in a club if I have anything to do about it.

ZR.: Returning back and talking about musicians, you have both played and recorded with lots of them. Which is your favorite partner to play with? 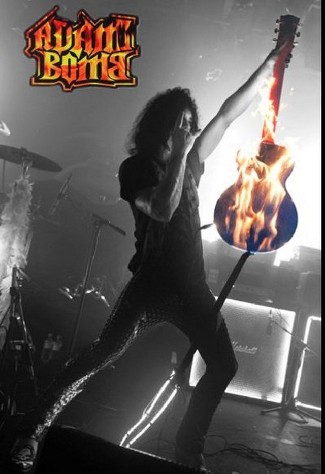 ZR.: We can see several covers in your set list. But I would like to ask you about the two oddest ones: New York, New York and Siete lonchas. Regarding New York New York, it is hard to imagine Frank Sinatra as one of your influences. Is he really one of your influences? On the other hand, how did Siete lonchas cover comes up? Did you know Antonio Flores before? Did somebody help you with the translation? I have to say we love this cover in ZonaRuido.com

Siete Lonchas was when I first came to Spain and hung out at a dodgy bar in La Elipa called Babel or maybe at a lock in a bar called Kenny Bell. I had a friend, Rafa, and we used to joke all the time about some of the acoustic songs I played, as I used to play a lot in Madrid. One of the songs I used to play was Siete Vidas. We ended up writing a punk rock version of the song about a loser addicted to cocaine. It was pretty fucking funny. It was just like a movie. A kind of song with the chorus taking the piece, “lo siento mi vida” making fun of Antonio’s lyrics. We were rutheless bastards, and I was writing it down on paper and I said “y con la ultima te quiero hacer “ and some guy that was passed out on the bar lifted up his head and said “un cigarro”.

ZR.: Although we are having this interview in English, I know you can speak Spanish. How did you learn it? Have you ever think about writing any of your songs in Spanish?

ZR.: Do you want to say anything to your Spanish fans in general and those from ZonaRuido.com in particular?