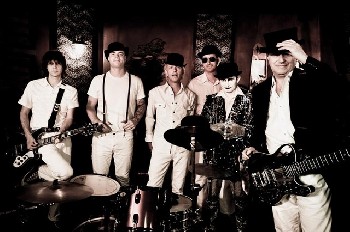 The British band The Adicts will be back to our country in May. After more than 30 years as a band, with some break –but never a dissolution- they maintain almost the 100% of its original formation. A handful of albums under their belts and lots of concerts here and there, have made the band to be known everywhere. They will be in shows in Vigo –where they begin the spanish dates-, in Madrid and in Barcelona among other places, before going to Germany. We have had the opportunity of talking with Monk and Pete Dee in order to know more about the legendary British punk band.

ZonaRuido: The Adicts origins date back to late 1975. Tell us how you have evolved, both in a personal level, as in the musical field over many years of career…

Monk: I don’t like to analyze it very much, if you premeditate it becomes obvious, we do just leave it to evolution, or re-evolution if you will…

Pete Dee: We kind of got older and more experienced in life. Same with our music. We have never been strangers to adversity and it has been a struggle to keep the faith alive. We have grown together and I think we have evolved very nicely like a fine wine.

ZR.: The Adicts appeared in 1975 with a different name: Afterbirth & The Pinz. Although I am not pretty sure I thing you also had another different name before decided the band was going to be called The Adicts… Why so many changes regarding the name of the band?

M.: Well none of those names were very good, there was also the dumb. Afterbirth never had any equipment, songs, or shows so that’s more of a concept than a band. The first true Adicts show was March 1978.

P.: It’s all irrelevant really. Plus the memory isn’t that good to even remember stuff like that.

ZR.: You are one of the few bands that in spite of taking so long in active, almost all the original members remains in the band at present. We think this is not easy at all. Tell us how you made it possible…

M.: Breathing, eating, drinking, we still love playing live, that’s all there is too it really.

P.: It worked out this way. Even though we could have split up many times. So many things in life can deter us from just being in a band. Like trying to keep a relationship or keeping a day job. Somehow we got through so much shit. And we are a family and close friends, we grew together and realized how important we are to each other. We enjoy what we do and we do it well.

ZR.: Your song Viva La Revolution, included in your first album Songs of Praise has been perhaps, the one that made you to be a well known band. In no more than three weeks it was included in the Indie Charts. At the same time this is a song one can found in three different records. Do you feel a special affection for this song or it is simply ‘one more song’ for you?

M.: It seems to connect with a lot of people, so yeah it is good to perform and still get a reaction from it, it still has a life.

P.: It’s a classic. When we hear our fans all over the world sing, it represents us all in many ways. If the world was a peaceful I doubt if we would play it. We shall always promote VIVA until we are all at peace.

ZR.: Personally, I do have a special affection for one of your songs… Chinese Takeaway. When I was only a child I asked my brother to let me hear this song which I called –and I think I will call it in that way forever…- ‘Papapía’, because of the chorus... You will have to play that song in Madrid… Leaving aside the story, if you could choose only one of your songs, which one do you think could be the most characteristic of the band?

M.: That not really a choice that can be made, now what does papapia mean? Something about potatos? 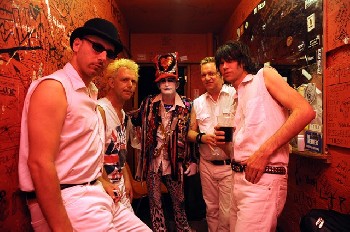 ZR.: To record the second album, Sound of Music, you needed a borrow from the bank. In only a couple of weeks you got all the money to pay the bank loan. The music world has changed a lot since then and nowadays that kind of things does not seem to happen, at least in our country… How is the music scene in your country now? If The Adicts would publish that first album now, do you think the result would be the same, or at least similar?

M.: Our country is UK and USA and we are in our 50s and not really hip to the scene. If we were teenagers now I don’t think we would copying something from nearly 40 years ago we would be into something new, whatever that may mean these days.

P.: Another one where I don’t know.

M.: For us as a live band now, it is nice to have things like stages, dressing rooms and a bed sometimes. Things that go backwards are rowers, tug of war teams and reverse cowboys.

P.: Technology in music has improved I like it. I try to keep up with the progress and it is cool. The downers are free music I disapprove of this, because it takes us, the band, much time and money to make every record. And downloading our music for free just doesn’t make sense, We have to eat, too. So next time someone downloads our music for free that’s another meal out my kids’ mouth.

ZR.: As you career has been progressing and you have been publishing more albums, we imagine it should be more difficult day by day to decide which songs to play in each show… How do you decide the songs inside each set list after so many years?

M.: Sometimes we have a rehearsal, not that often, but when we do we play through a list of songs randomly, and then someone says, ok lets write the set. An argument then ensues and steam comes out of kids’ ears. We use the steam to make a cup of tea and someone brings cake. We then decide civilly and democratically.

P.: With difficulty… It is the only time we get a bit pissed off with each other. I find it comical at times. The set always turns out pretty good. We really do put our all into it as a team.

ZR.: What can you tell us about the concerts you will have in our country? What kind of novelties could we find in this tour with respect to other European tours in the past?

P.: I have no idea what is in store. Probably lots of fun, energy and great gigs. Playing in Spain is always a special time. I love the people, the culture and I really enjoy the football. I find the Spanish passionate and really pour out the love for The Adicts. :) I wouldn’t mind living in Spain!

ZR.: Changing the subject in a radical way... After Margaret Thatcher’s death, imagine you are the responsible ones to write the epitaph on her grave… What text could we read on it…?

M.: I don’t have any political views, so don’t speak for the band on such things, in the 70s we wrote a song, never recorded called Government Man. A line was "Margaret Thatcher, she’s just a vote catcher". I don’t know what that was supposed to mean but suspect it was just poetic, so "First woman Prime Minister, and rhymed with catcher in not very good Adicts song". 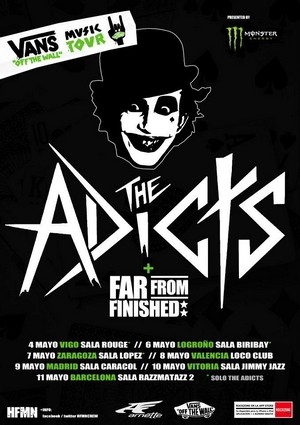 ZR.: What do you think about social movements today? Do you think the number of protests is bigger now or youths were more revolutionary 30 years ago?

M.: As above, I don’t know who's protesting what or where.

P.: No. People are very apathetic and talk too much. I suppose it is down to growing some bravery. And actually standing up to hate and greed. Talk is cheap. Getting up and making ones voice heard is important and it really doesn’t do much on the internet. Get out and use your feet and your voices will be heard…

M.: Don’t care one way or the other. Fuck me who cares what it is or what you call it, live your live your way. Do no harm.

P.: I don’t really care. It’s been spoken about the same way since it began. Look around, it’s still here and always will be. To me Punk is a feeling inside. Be yourself. Stand up. We are all different. And we express it in our music as well. What I don’t like is the word Punk. And the way it has been portrayed as a fashion. Who cares what you wear!? But I noticed this way back> Leather jackets with studs in was Metal. So what the fuck has studs in jacket got to do with Punk!? You don’t have to look like someone else to be Punk…

ZR.: Throughout all these years you had had to answer lots of interviews… Is there anything you have tried to tell in any interview but you have never had the opportunity to do it? If so, it is the moment…

M.: Yes, how about some interesting and original questions? Not you… The others…

Thank you so much for your time. See you in Madrid on May 9!